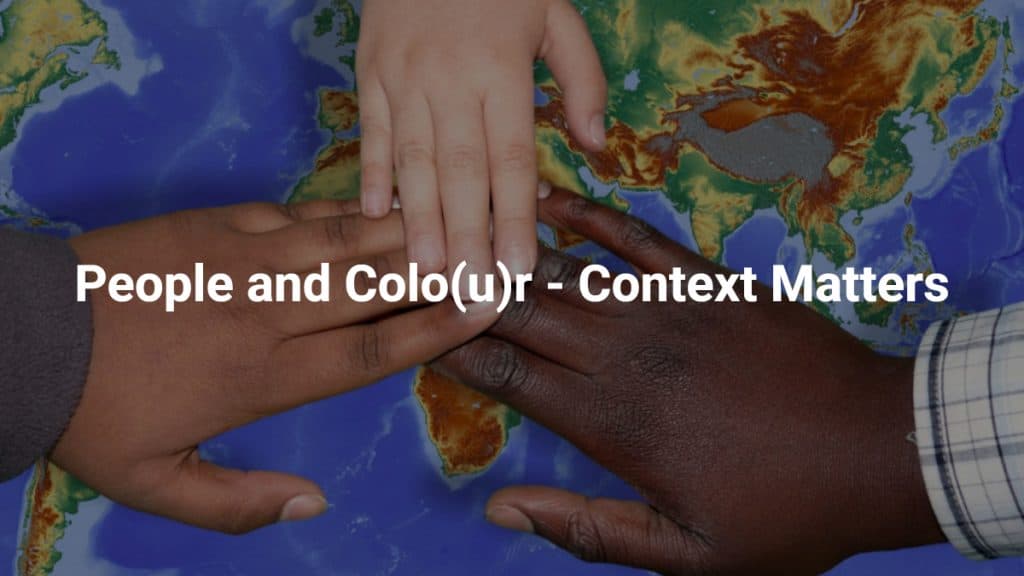 One of the most challenging areas of diversity to work with is that of race, and as always, when working globally, context matters.

Sociologists remind us that race is a social construction. In other words, while physical differences exist (“if you are visually abled, you can tell that people are different based on their skin colour and other physical signs,” — Zuleyka Zavallos, https://zuleykazevallos.com) — the meanings that we attach to these differences vary widely according to country and culture.  As a reminder of how arbitrary these constructions are, we tend to consider that differences in eye color are not significant, while differences in skin color are (thanks to the Winters Group for this example — www.wintersgroup.com).

Given that in many countries skin colour (color in the US) is considered a significant aspect of racial diversity, as a global practitioner, it’s important to be able to understand the local language of race. Do you know when to use the term BAME? BIPOC? People of Color? Coloured? ATSI? Pakeha? Culture rather than Race? Colourism rather than Racism? None of the above?

Please bear in mind that this is not an exhaustive list – all of us have blind spots and gaps in our knowledge, myself very much included. For example, I note how many of these terms originate in white English speaking majority countries of the Anglo diaspora. And that some of these terms can be considered offensive in some countries. What’s important as a global practitioner is to understand not only local terminology, but the structural, social, political, and — critically — emotional impacts of how race or colour is constructed, defined, and discussed.

I believe that we are all one people on this earth, and that the essence of diversity and inclusion work is to enable us all to work together well, to respond to the many issues facing us on this planet, in all of our colours. I am inspired in this by Brazilian photographer Angélica Dass’ Humanae project; I encourage you to watch her TED talk and explore her images of humanity: https://www.angelicadass.com/humanae-project. As she reminds us, we all have a skin colour.

And, as in all diversity work, race and colour is a both/and topic: we are all one, and the differences matter.

Answers: BAME (Black, Asian, Minority Ethnic.): UK – and note that Asian refers primarily to people from South Asia (India, Pakistan, Sri Lanka, Bangladesh, etc.);  BIPOC (Black, Indigenous, People of Color): Canada;   People of Color: USA;   Coloured: South Africa (one of the racial groups acknowledged in the Constitution);   ATSI (Aboriginal and Torres Strait Islander): Australia;   Pakeha: New Zealand (a Maori word used for white Europeans);   Colourism rather than racism: India and many others including African cultures, where colourism is a significant, if not always publicly acknowledged distinction;  Culture rather than race: many countries